The Hong Kong International Wine & Spirits Fair, held at the HKCEC. The annual gathering of trade and public over this 3-day event, seeing over 1,000 producers and 20,000 people come through the door, puts the city in its most telling light: business-driven, sociable, high-energy and chaotic.

Given the dominance of international grape varieties such as Cabernet Sauvignon, Pinot Noir and Chardonnay in today’s wine market, initially the aim of our visit was to taste as many marginal and local grape varieties as we could find, but instead our experience at the HKIWSF turned into a series of engaging encounters with a handful of personalities behind some of the less-well-known wine producing regions. The appetite was there, but would the wines back it up?

After a swift tasting through some of Spain’s wines, Meg and I introduce ourselves to the charming and enthusiastic Martina Hunn from Kilian-Hunn wines (pictured above, with her family). Located in the Baden Anbaugebiete of south-west Germany, close to the Swiss border and on the doorstep of the Black Forest, this was the first time their wines had made an appearance at a wine show in Asia. “Hong Kong is a really intimidating place, but we believe we have the wines to impress people”, Martina says.

deliberate move towards the razor-sharp stylistic marketing of the New World. With a line-up of single varietals and a focus on freshness and aromatic character, she believes this represents their best chance to penetrate the market here. Starting with the whites, the self-styled “Cuvee Martina” is a pale lemon-green, fruity offering made predominantly from Müller-Thurgau. Simple and straightforward. The Weiβburgunder (Pinot Blanc, left) had real personality to it though; typical of Alsatian varieties from across the border in France, it demonstrated an attractive floral nose and a stone fruit-led, weighty body. The Grauburgunder (Pinot Gris) followed a similar path, with even more punch on the palate due its slightly higher alcohol content (13% versus 11.5% in the Weiβ). Three very enjoyable wines, and ones that deliver on

We move on to their Spätburgunder, or Pinot Noir (right). “It can get to 40 degrees centigrade in the Summer”, Martina explains, “so we pick relatively early in order to avoid that jamminess you can get with this grape”. It makes sense: the wine had a style similar to that of a Pinot from New Zealand’s North Island – medium in body and alcohol, red fruit with some sweet spice cues. It was wonderfully fresh and clean, and with that integrated oak, added quality.

Consistent with this theme of wineries from less-well-known parts of established wine nations producing notable output, Deep Woods Estate from Margaret River grabbed our attention in the Australian section. An oft-quoted boast from this part of the country is that they “only produce 5% of the wine, but win 30% of the awards”.

Steve Bradshaw, responsible for Australia & Asia marketing, instead focuses on a more humble approach, citing how Margaret River, in spite of its marginal contribution to Australian production, is developing a

reputation for high quality wines through measured investment and a strong respect for traditional methods (“I can recall when tractors used to drive up and down the main street through the town”).

Due to its Bordeaux-like climate, the Indian Ocean-facing region is famous for its Cabernet Sauvignon, but Burgundy stalwart Chardonnay was the main topic of conversation. Australia’s interpretation of the famous grape has flip-flopped over time, from over-oaked – and therefore overbearing and unfashionable – full-bodied types a decade ago, to austere, almost neutral styles in more recent years.

Of late though, Steve says, Australian winemakers are starting to “get it” by blending differently-made parcels of wine together – in their case, some fermented slowly in cool, anaerobic conditions; some in new, large-format oak and some in old, traditional 225l barriques. Lees stirring is also

used selectively. Although more onerous, the resulting output has given them much greater optionality about the type of wine they want to produce, with that all-important focus on quality and consistency.

We try their estate (“Hillside”) Chardonnay, left: bright lemon, it was citrus and green fruit-driven with subtle vanilla courtesy of the old oak. Well rounded and pleasant, designed for early drinking. The reserve wine, with its combination of new and old wood in addition to the batonage process, was layered and complex. A strong acid thread should ensure good development; these wines will definitely be worth keeping an eye on.

The appropriately-named Vianney de Tastes from Château Bélingard in the picturesque Dordogne region was our next memorable meeting. Often disparagingly tagged as “Bordeaux copies”, the vineyards south of Bergerac produce approachable, easy-drinking wines: Vianney was keen to explain how, in spite of having to operate within the rules of the Appelation d’Origine Contrôleé, they could still be innovative and make wines that were relevant in today’s market.

He takes a “semi-organic approach” to winemaking, with minimal use of sulphites so that the grapes can “express themselves”. Very true in the case of his blend of Semillon and Sauvignon Gris, the latter a clonal mutation of the hugely popular Sauvignon Blanc. “The French market is so traditional, but we realise we have to adapt to stay relevant”, Vianney explains as the basis for this new wine. Great for a hot climate, the Semillon provides body but the Gris leads with citrus and floral notes on the nose, and lovely acidity on the palate. Refreshing and uplifting, and at “€7 a bottle”, what a bargain.

We then sample their reserve sweet wine from AOC Monbazillac, a combination of Semillon, Sauvignon Blanc and the exotically-perfumed Muscadelle. Although well inland, Dordogne’s valleys see the appropriate combination of early-morning mists and warm, sunny afternoons to produce the famous Botrytis fungus, or noble rot. Not cloying, the wine is light, balanced, with high acidity to counteract the sugar. The honeyed marmalade finish is terrific, leading me to ask for a top-up before we head off.

Following a willing but ultimately unsuccessful foray into the world of Chinese wine – a Cabernet Sauvignon from Ningxia had blackcurrant and herbaceous varietal character, but really lacked balance, while a Sauvignon Blanc “Icewine” left us with an unpleasant burnt honeycomb finish that felt like it would last until Christmas – we happened upon a crowded stand, full of jostling spectators keen to try wines from…the Crimea.

Although seen as a new addition to the wine scene in this part of the world, Czar Nicholas II founded the famous Massandra winery near Yalta in 1894, so the region has provenance. We were glad we battled through, 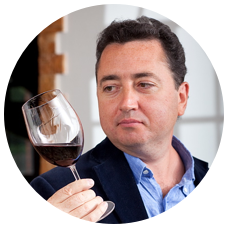 as there was a real story here, not to mention some genuinely good wines. Among the throng, we managed to engage with Igor Serdyuk (right), Deputy General Director of the Alma Valley winery and “part-time journalist” (he is also a master of modesty, as he is actually a leading Russian wine writer, and a contributor to such lofty overseas titles such as Robb Report and Forbes). He walked us through how the Crimea’s mild Mediterranean-style climate, with the cooling influence of the Black Sea, made it an exciting spot for the production of classic grape varieties. They are also aiming for growth: “currently we produce 500,000 bottles per year; by 2018 we want to be at three million”, says Igor, confidently.

We started off with their Riesling. They halt fermentation to leave 15g/l of residual sugar, but still manage to run it up to 14% alcohol while maintaining the acidity the grape is noted for, so the resulting wine is refreshing but has real backbone. Fruit was more tropical than green, but in spite of the difference, I couldn’t help thinking we were drinking an off-dry Spätlese from Mosel in Germany, albeit one with an electric-

powered turbocharger attached to its back.

More surprises followed. Dressed in delightfully retro Soviet-era labels, we tried Alma’s Summer Wine (left), an off-dry 50/50 blend of Shiraz and Pinot Noir. Ostensibly a rosé, the “wine to drink on the beach” came in at just 11% alcohol but still had proper red fruit character delivered with fresh, crisp acidity without being dulled by the leftover sugar. They achieve this with dedicated fruit for the wine, so the colour and acidity are just right, then start vinification with a short cold maceration before direct pressing. These guys do it properly, and the result is impressive.

Next, the “wine to drink with your picnic” (below; sold for US$5 locally) led me to think we would be tasting something only marginally higher in body than the previous offering: instead it nearly

blew my head off. This Cabernet Sauvignon/Shiraz mix was black fruit-led, high in acidity, tannin and alcohol – reminiscent of a Coonawarra blend – leading me to comment, “Igor, I’m not sure I would categorise this as a picnic wine; shouldn’t this age for a few years first?”, to which the retort was as bracing as the wine itself: “that’s because your Western palate defines a picnic as tapas-style cold cuts, whereas in my part of the world a picnic is big barbecued red meats”. He made a valid point, and the wine was indeed perfect for its intended use.

Having then run through their standard and reserve Tempranillos and Shirazes, both strong with everything in place, we offered our thanks for his time and wished him all the best as they, like Martina, Steve and Vianney, attempt to drop anchor in the Hong Kong market.

“Before you leave”, Igor said quietly, “let me show you something on my phone”. It was a picture of a brief hand-written note on Alma Valley headed paper, from none other than Vladimir Putin: “Very delicious, very beautiful and qualitative! Good luck!”

With quality and support such as this, you can’t help thinking this particular part of wine’s new frontier won’t have any problem in achieving their goals.

2 thoughts on “When people enhance a wine’s character”