Not even a week into December and the pressure has, already, become too much to bear. Having a six-year-old in the house with no visible yuletide adornments means only one thing: it’s time to get the tree, dust off the stand and decorations, find the Christmas tunes playlist, and, of course, enjoy that first mince pie.

Meg and Saffy have made our traditional festive treats this year (above): soft crumbly pastry, filled with rich and spicy fruit, they sate our sweet teeth. But what to drink with them? Mulled wine is in keeping with the season, dark ales or tea also work…but we’re going to try Port.

Comforting and enjoyable, this fortified wine from Portugal has never really enjoyed mainstream popularity. Its production dates back to the 18th Century, when British merchants created a way of preserving the local red wine as it sailed slowly to the dinner tables of northern Europe. Over the years it has endured a stuffy, traditional image (below); the after-dinner preserve of the gentlemen’s club, usually associated with Stilton and cigars, not to mention the occasional dose of gout. It definitely deserves better.

What exactly is Port though? Using grapes such as Tinta Roriz from the hot, inland climate of the Douro Valley, it is a sweet, usually red wine, made by halting fermentation through the addition of a high alcohol, neutral grape spirit. Production is centred in the town of Vila Nova de Gaia (below), across the river from the capital Porto. 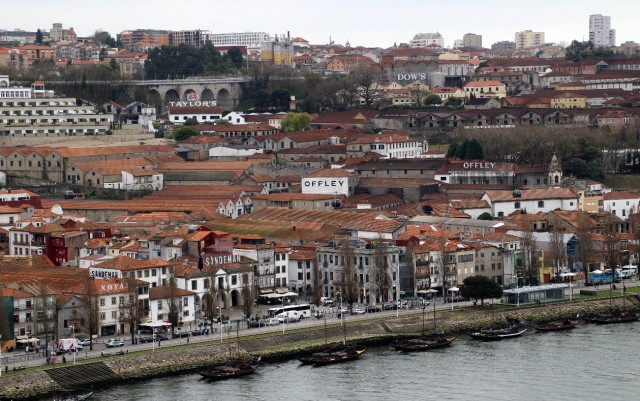 Unlike other red wine, the juice of the grapes is not given the usual long period of contact with the skins (in order to extract flavour, colour and tannin), so instead teams of people used to tread over the grapes in large troughs called lagares to speed up the process (below); nowadays though,

away from the tourist throng, this process is done in robotic form, with automated feet mimicking human action.

Once the required maceration has taken place and the alcohol level has reached 6-9%, the grape spirit (at 77% abv) is added. This kills the remaining yeast in the fermentation process, so a sweet wine remains, at around 20% abv, ready for maturation.

The red version of the wine is made in three broad styles:

To go with the mince pies, we taste one from each of the first two categories: Graham’s 2008 LBV and Warre’s 10-year-old Tawny, branded

“Otima 10”. The latter’s packaging (right) and website show how the producer is trying to move away from that previous image, suggesting a more modern, flexible drink. It’s refreshing to see.

Starting with the LBV (below, served at room temperature), it was a deep ruby colour with heaps of black fruit and liquorice on the nose. To drink, its pronounced body was smooth, soft and rich, delivering a long finish of blackberry and black cherries. The Otima 10 (served slightly chilled) was an entirely different proposition though. A reddish tawny brown colour, its nose carried a notable raisin character (often referred to as rancio in Spain and France) and on the palate, that oak ageing made any trace of fruit almost non-existent, instead delivering coffee, caramel and a slight nuttiness.

Both very interesting wines, and certainly different to each other, but which was the best match for the mince pies? The Tawny almost seemed more appropriate as a stand-alone drink given its unique flavour characteristics (which I did like), but the Ruby, with its black fruit and fuller body, acted in a more complimentary fashion. The two in tandem provided such a rich treat though, I was beaten after just two pies!

Worth nothing that Port doesn’t just provide an accompaniment to festive snacks; most versions will go well with hard/nutty cheeses, as well as hearty desserts like apple crumble, as the sweetness and body of the wine will match the dish. Also, it can elevate the flavour of gamey red-meat dishes like lamb and venison (more on food and wine matching in future posts).

So everything is done, and the countdown to the 25th can officially start. The Christmas tree is up and dressed, the decorations are set, the Sun has gone down and Saffy is tucked up in bed. The air is filled with the smell of spruce, as well as sweet spice from a Christmas candle. There’s only one thing to do now: it’s time for another glass of Port.

Keen to give some a try? The best place I could find in town to browse by the bottle was Oliver’s in the Prince’s Building. They carry an impressive selection of Rubies and Tawnies, as well as a handful of rarer Vintage bottles. Give them a go.

You can also find our latest tasting adventures here. Silly season officially starts this week, so expect plenty of updates from now until Christmas!