The following is an account of a dinner organised by Vega Sicilia and Altaya Wines, Hong Kong and Macao’s official importer of Spain’s most famous and long-lived wine.

I am led through the bustling restaurant and into a private room. The door is slid closed behind me; formal introductions are made. This will be an evening full of surprises. 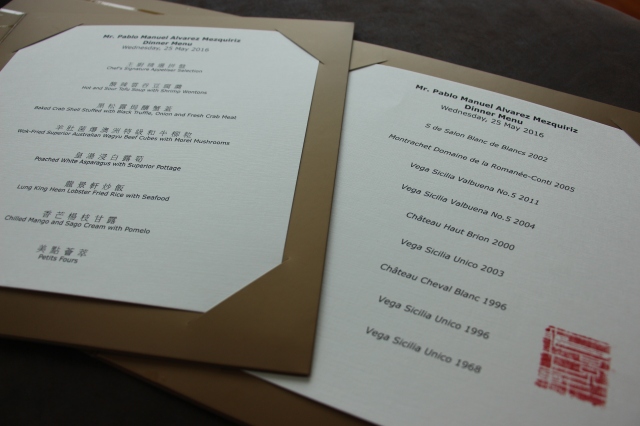 The next three hours would be spent on a quite remarkable vinous journey. All bottles had been decanted an hour before we arrived, with Pablo adamant he would not tell us the identity of any wine until we had all taken a sufficient sample.

Flying blind, we start with Champagne.

“Chardonnay heavy”, we say. The consensus across the table is that we are drinking a Blanc de Blancs (that is, Champagne made from 100% Chardonnay, as opposed to the traditional blend of Pinots Noir and Meunier, and Chardonnay). More straw-yellow than gold, it was light with a super-soft mousse; refreshing but with lovely depth of mouthfeel. Not overly complex, although served a little too cold so much of the nose seemed slightly suppressed. Baked apple and white flowers started to come through as it hit its stride. Still very youthful.

A shimmering rose gold colour with a slight coppery hue. Inviting and interesting. A haunting nose, making me ponder, and then ponder some more. I can’t recall such a complex set of aromas as this, immediately knowing it was unique, and certainly something I have not tasted before. Beguiling and truly ethereal, it danced between flinty/granite mineral, soft citrus and stone fruit, wild flowers and a perfect level of vanilla and toast from the oak. On the palate it was structurally perfect, delicate yet powerful, rich yet understated, it had an almost impossible-to-fathom finesse and subtlety.

Our host is enjoying watching us trying to figure this one out. The reveal: it is a Domaine de la Romanée-Conti, from the most famous white grape vineyard in the world. The production of this wine is just 250 cases per year. Hours later, when I am lying in bed, I am convinced I can still taste it; like it has somehow been imprinted on my subconscious. Simply the finest white wine I have ever been fortunate enough to taste.

“Normally”, Pablo says matter-of-factly, “we would serve this at the end of the meal with a simple piece of Comté cheese”. Vega Sicilia also happen to be the Spanish importer of Burgundy’s most famous label.

With heads still spinning from the above wine, we move on to the reds. This will be the youngest wine we try, and the first from the Vega Sicilia estate, located in Spain’s Ribero del Duero region. Named 5º after its five-year maturation period, it is a pure expression of the Tinto Fino grape, or Tempranillo. Fresh dark fruit leads, plum especially, but a savoury note was already starting to emerge. Very early in its life cycle, rich vanilla jumps out of the glass, and the palate is almost creamy. The tannins are already very soft. Later, when I return to it, a note of pure mocha attacks my senses.

The seven-year difference to the above is stark; this one is a lot more reserved, almost in a closed period. Initially, it was clear it needed more time in decanter or glass. Upon trying later in the evening, it started to introduce itself with a notable – and curious – menthol character. Savoury and sweet rustic red fruit (dried strawberries?) came through.

Although the number four is not synonomous with good fortune in Chinese culture (quite the opposite, in fact), “the 1954 vintage of this wine was great”, a fellow guest comments.

Pablo’s first trick of the evening arrives, but the audience isn’t being fooled. The table instantly recognises that this is not from Spain, but from Bordeaux’s Left Bank, with its trademark Cabernet-led nose. Herbal, cedary and dusty, a slight metallic cue joins the expected blackcurrant leaf. So elegant. Clean and linear on the palate, nothing out of place. Powdery tannins and precise acidity means this perfectly-executed Claret, with its long finish of soft dark fruit, is simply a delight.

Vega’s flagship red, very few wines spend this long maturing before release. Most vintages, Pablo explains, spend at least a decade in oak and bottle before hitting the market, and then a generation is often needed to hit their peak. “The 70s and 80s are drinking very well now”, he says when I ask him where the sweet spot for his wines are.

This is a beautiful wine: plenty of fruit on the nose from the Tempranillo, but wonderful floral and brooding smokiness, and what appeared to be black tea, made for an initial sensory overload. With perfect balance, not in any way heavy, it was a terrific accompaniment to the Wagyu beef.

As with the Valbeunas, we taste a second iteration, seven years older. Idiosynchratically, although it is in the minority, the Cabernet Sauvignon dominates the nose (usually, Unico is made up of 80% Tempranillo and 20% Cab). Lovely blackcurrant wafts after that initial swirl. Like the 2003, the balance on the palate strikes you most, but it is the extra age which adds an extra dimension to this complex and layered wine. The finish goes on and on.

As with the Haut-Brion, this seems out of place, but in a wonderfully good way. More rustic and powerful though, the Cabernet Franc and Merlot deliver hedonistic but savoury fruit, along with a marked graphite note. So much quality to the taste. For me, this one took the prize for best Bordeaux of the evening.

Our final wine of the evening is a third Unico, and it is stunning. In an example of take-it-to-the-extreme maturation, this was not released to market until 1991. For a 48-year-old wine, the table could hardly believe its freshness (in my notes, I use an expletive to describe my initial reaction): with a remarkably similar fruit profile to the Valbuena 5º, it showed soft smokiness and sweet spice, but perfectly ripe dark fruit led the way. And as the below picture shows, it showed hardly any tawny-brown colour, a key indicator of age. The finish, rich and satisfying, lasted for even longer than the 1996.

It feels like this wine will live as long as its lucky owners resist the temptation to open it.

It is often said that people don’t like surprises; not being in the know can often be a disconcerting experience. After a fascinating journey through this series of truly special wines though, all which were not revealed until after we’d taken our initial sips, I’m not sure I subscribe to this idea anymore. It was a pleasure to attempt to decode what we were tasting, concurrent to actually enjoying them.

Away from the feeling of good fortune in being able to taste these wonderful bottles, special evenings like this can affirm that when done right, wine can produce some truly glorious and profound moments.

Sincere thanks to Mr. Paulo Pong, Managing Director of Altaya Group, as well as Snr. Pablo Alvarez, for arranging, and allowing me to participate in, such an incredible evening. You can find out more about Vega Sicilia, as well as purchase the wines themselves, by going to Altaya’s listing page here.