In my third collaboration with Hong Kong merchant Ginsberg+Chan, we explore the brilliant wines of Chassagne-Montrachet in Burgundy by tasting seven different examples. 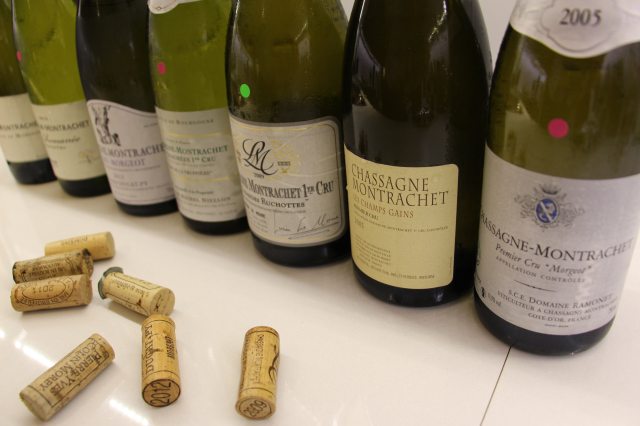 Ginsberg+Chan present a selection of wines from Chassagne-Montrachet, the white wine-dominated AOC on Burgundy’s Cote d’Or. Adjacent to its illustrious “brother” Puligny-Montrachet, it has 55 Premier Cru vineyards – three times more than Puligny – and 3 Grand Cru ones: Le Montrachet, Batard-Montrachet and Criots-Batard-Montrachet, the first two of which share a border with its neighbour.

Medium yellow in colour. A very soft mineral note first hits you – less sulphurous than a young Puligny-Montrachet. Instead of fruit, a minty (spearmint?) character appears next with citrus a distant third. To taste, bracing acidity leads to a simple, perfectly pleasant and refreshing lemon-led mouthful. A straightforward young wine.

A really nice wood smokiness from the oak draws you in, although there’s not quite the layered aroma you’d expect. Strong on the palate though: rich and rounded, apple, lemon peel and an interesting mineral character (perhaps expressive of the chalky/limestone soil under this particular parcel of land) all feature well. A solid, medium-length finish with a nice note of white flowers. 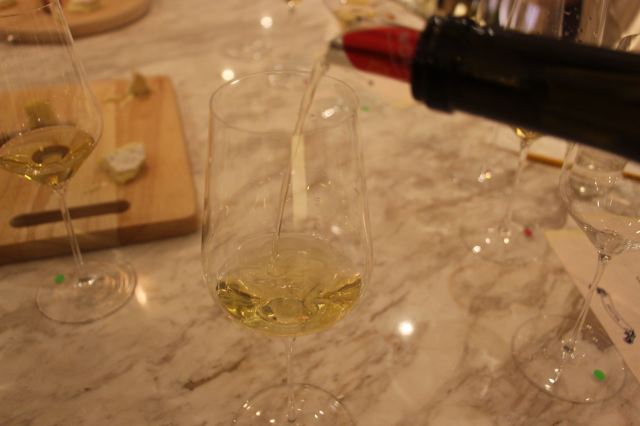 The second tasting flight (pictured below) immediately looks an interesting prospect. All of them, as expected, were darker in colour given their age. First up, this Morgeot from Dugat Py had a nose not dissimilar to the Buisson. Very balanced and inviting. Mouthfeel good but to taste it was all about the finish – a strong acid thread delivering a seriously rich, buttery/toasty experience. Enjoyable stuff.

Huh – what’s going on here? A really funky nose, almost vegetal-like in character. Hard to place, but to me it seemed like buttery grilled asparagus. Someone also commented it had a fungal note there, coincidentally reflecting the site’s name (‘walled truffle’ vineyard). Very idiosyncratic, and perhaps slightly reductive in nature. Despite a lack of fruit, the palate was good though, with razor sharp acidity and that trademark oaked Chardonnay finish of buttered toast, like the above. Worth sticking with.

Seriously deep gold in colour, but unfortunately this was the only appealing aspect of this wine. Bordering on faulty, the nose unfortunately had the spectre of oxidization hanging over it. “Frazzled bacon” I find myself writing in my notebook , for some reason. To taste it was structurally okay, but those out-of-place oxidative flavours (raisins, bruised apples, among others) dominated. Fine in Madeira perhaps, but not on Burgundy’s Golden Hillside. 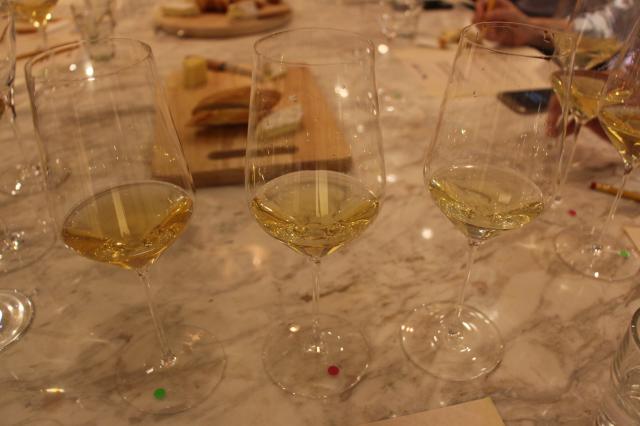 We got right back on track with this effort from Morey. Pale gold, there was something distinctly soil-led in the nose. It seemed, if anything, quite closed – teasing longevity, a fact confirmed upon first sip. With notable power, its bracing acidity and punchy alcohol was in terrific harmony with a fresh citrus and mineral thread. Excellent balance, and the first real example we’d seen of this. A lovely “strong” finish, again that real power coming through, this would be an awesome match for a rich chicken or fish stew. Voted favourite of the night by the majority of the group, and a wine which has many years left in it.

The nose on our final wine was much more in ready-to-go mode versus the above. With a fresh apple-lemon note, there was also something candied there (appealing). Confirmed on the palate, this wine is likely at or near its peak, with its buttery richness now fully integrated. Not overly complex, but a very pleasant and mature finish nonetheless. Good wine.