Start the clock! Between late October and mid November, Hong Kong’s food and wine scene goes into overdrive with a series of events. On Sunday I went along to one of them, a collaboration between Altaya Wines and eRobertParker.com known as Matter of Taste. Instead of excessively dwelling on each pour, I attempted to fly through as many as I could in the shortest possible time…

Wine writers — including me, I admit — have a tendency to over-elaborate when explaining the glass they’re tasting. Instead of helping the reader, what often occurs is losing them in an exercise in ‘wordsmithery’, describing things that bear little practical relationship to an alcoholic drink made from grapes (“crushed rocks”, anyone?).

In attempt to take a different turn, at the recent Matter of Taste event in Hong Kong’s Shangri-La I decided to hit as many wines as I could, speed-dating style, in 90(ish) minutes, then see if I could come up with a conclusion as to which ones I actually liked best.

In true matchmaking style, I’m only allowing myself 3-4 minutes at each tasting table…

We start with bubbles, and two terrific producers (below) were on hand to help: Delamotte and Pol Roger. The former’s standard NV fizz was dry, rich and creamy, with their 2007 Blanc de Blancs (that is, 100% Chardonnay) a lovely mix of stewed apple, toast and biscuity yeastiness. An excellent way to get things going. 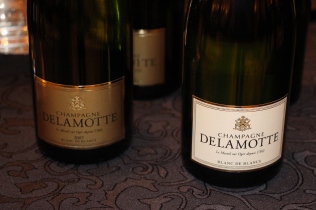 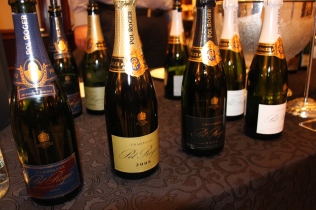 Pol Roger makes quality Champagne at all price points. Their entry-level NV was clean, energetic with pure apples and pears (no Cockney Rhyming slang intended). I really liked the 2006 vintage (60% Pinot Noir + 40% Chardonnay); with terrific balance, it was nutty and rich. The 2008 Blanc de Blancs, on the other hand, was more herbal and a touch on the hollow side. The 2004 of their benchhmark cuveé though, the Sir Winston Churchill, was rich and powerful, delivering a big hit of vanilla-infused Chardonnay. One for a serious, perhaps second or third, date.

Staying in France, we head south to Burgundy. A 2014 Château des Quarts Pouilly-Fuissé is still our familiar grape Chardonnay, but because it is located further south, tropical fruit and weight comes through. Delicious, and would be a great food wine.

South again into the Rhone Valley, and Château de Beaucastel’s Blanc and Rouge Châteauneuf-du-Pape were both strong; the former an attractive rose-gold colour, oily and floral, with the latter big and powerful, with its 10% Syrah hitting you with its customary pepperiness.

Now who’s this? At speed-dating events you’re normally looking to get to know new faces — but here’s a familar one. It’s none other than Pablo Alvarez, main man at Vega Sicilia, and host of probably the most memorable wine dinner of my life. His entry-level red, a 2011 “Pintia”, is rounded, full of brambles and black cherry. Next up is Vega’s “Valbuena 5°”, with its 5-year maturation it was full of soft dark fruit and beautifully integrated sweet spice. An old flame.

The Kiwis are here, albeit in low numbers and tucked away in a corner. What a couple of outstanding producers though. First up was Rippon, arguably home to the world’s most picturesque vineyard, are described as a “hidden gem” by James Rowell, Altaya’s Manager of Corporate & VIP Sales. He’s not wrong; their 2013 mature-vine Riesling is tight, refreshing, high acid and gives the taste of pure Granny Smith apple. The 2012 Pinot Noir is ripe, full of dark fruit and beautifully balanced.

We’ve always loved Martinborough’s Ata Rangi in our household. Their 2013 Pinot Noir, a box of which has my name on it somewhere in the Wiltshire countryside, is seriously powerful, herbal with some red fruit…but its all about that concentration of flavour, yet to unfold, that suggests this will be perfect for a long-term relationship.

Time to go Stateside. Fisher has vineyards in Sonoma and Napa Counties in California, producing a lot of different styles — most coming from individually-named sites — and I’m here to try four. First up, their Mountain Estate Chardy was rich and mouthfilling, but the oak was not over the top. Plenty of time to develop. We jump straight to older wine, a 2003 Lamb Vineyard Cabernet Sauvignon: more herbal (sage) than fruit on the nose, but to taste it was rounded and extremely pleasant, especially the tannins.

Next up is the Wedding Vineyard Cabernet. Its name might suggest a little too much keenness for a bunch of quick-fire matchups, but this was a lovely wine; excellent concentration and bags of blackcurrant varietal character. We finish with a younger offering, Fisher’s Mountain Cabernet; this is more of a blend seeing as though there’s a decent amount of Cab Franc, Merlot and Petit Verdot in the mix, and it’s a cracking early-drinker, full of up-front fruit and sweet toffee-like notes. Perfect for a sixth-date night in, watching a movie with a burger.

Any tasting in Hong Kong — fast or slow — wouldn’t be complete with taking in its most popular wine: red Bordeaux. There was plenty on offer… 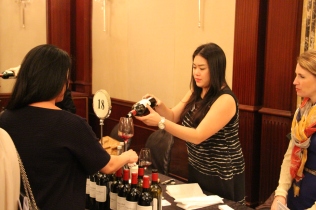 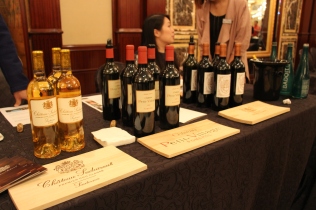 Starting with the nice people at Château Haut-Bailly (above, pouring), their 2012 Grand Vin was attractive and classy, with a typical Cabernet nose. Its older sibling, the 2008, was appealing enough but lacked body. Forgettable unfortunately. On to Château Calon-Ségur, with just the 2009 on show, its 90% Cabernet in 20 months in new oak really coming through with a powerful finish.

Next door at Château Phélan-Ségur (below), in spite of being part of a stellar vintage, their 2009 was a little flat on the nose; it certainly seemed quite shy but you’d expect it to blossom given 5 more years. The 2010, another fine year, was a monster though: the tannins hit you between the eyes and rolled over any notion of fruit. This should come together to form a brilliant wine in 10 years+. Imposing character indeed.

Weariness setting in so on the final table, I taste a 2009 Château Baron Pichon de Longueville (beautiful nose typical of Pauillac, the AOC it comes from), a 2009 Château Petit-Village (from Pomerol, Merlot country, with lovely soft tannins) and my final wine, a 2009 Château Suidurat (hooray; something sweet from Sauternes, with its rich and honeyed marmalade nose and palate, and a finish of pure caramel). Phew…all done.

So in a short space of time, I managed to meet a good number of wines, all with different personalities. Pretty much all of them made for very enjoyable company. Which ones would I want to politely ask for their details though, in the hope of a follow-up drink?

If I was only allowed three from the 26 I tasted, I’d have to go for the 2006 Pol Roger, the 2013 Ata Rangi Pinot Noir and Fisher’s 2006 Wedding Vineyard Cabernet Sauvignon, with an honourable mention to the 2010 Château Phélan-Ségur.

I guess I’m ready to commit after the speed-dating frenzy after all.

If you enjoyed this article, thanks for sharing using the buttons below. Be sure to Like my Facebook page, and I can also be found on Twitter here.

A big thank you to the friendly folks at Altaya Wines for asking me along!

3 thoughts on “How to speed-date at a wine tasting”