In my latest collaboration with Hong Kong wine merchant Ginsberg+Chan, from arguably the most revered collections of vineyards in the world we taste six wines from two producers. The result shows how vastly different styles can be achieved from the same vineyard…

On the outskirts of a small village in the heart of Burgundy lies a parcel of land unlike any other. Often described as the finest, most elegant and purest expression of the Pinot Noir grape, Vosne-Romanée is home to the world famous Grand Cru vineyards of La Romanée-Conti, Richebourg and La Tâche. These micro-sites, in some cases no larger than 2 acres in size, have for hundreds of years produced wines that have little competition from. As such, according to Jancis Robinson, “the market seems to stand any price”.

Orbiting these Grand Cru sites are 14 Premier Cru vineyards on 135 acres of land. For my next tasting with the friendly folks at Ginsberg+Chan on Hong Kong’s Queens Road Central, we choose one of these vineyards — Aux Malconsorts (below) — and open 3 vintages from 2 different producers, Domaine de Montille and Dujac. Often known for their austere and closed early years, before flourishing with sufficient bottle age, the tasting was an excellent exercise in the different styles being produced.

Hosted by Roberto Gallotto, with around a dozen people in attendence the evening takes the form of three flights, Premier/1er (for the 2012 vintage), Deuxieme/2eme (2011) and Troiseme/3eme (2005)…

This wine’s youth immediately jumps out the glass in the form of sulphurous minerality, often the hallmark of young red Burgundy. Along with a marked flinty note, Cypress tree and pine grab hold, showing how complexity is already starting to develop (you needed to search for any trace of fruit though). Its palate seemed very delicate, with subtle power and an acid thread that sits in the background; again the fruit was peripheral. With some bitterness on the finish, this is a wine that still has some way to go.

Like the Montille, the innocence of youth is immediately obvious. Again sulphur is present, but less imposing. Its nose was full of interesting elements, but it seemed slightly out of kilter: rosemary and sage make an appearance along with button mushroom, as well as a definite cherry/red fruit character. Sounds okay, but the nose did not seem overly appealing to the audience. Upon first taste though, everyone could tell this was a wine built for the long term; in spite of slightly dulled alcohol, strong acid and tannin levels suggested this should unfold excellently. A powerful finish immediately showed that stylistically, even though the rows of fruit are just metres apart, Dujac seem to be making a different wine to Montille.

Ah, there’s the fruit missing from the younger wine…and goodness me, a whole bunch of other stuff. One of the most complex and interesting noses I’ve ever sampled. All in balance, there was a heck of a lot going on here: firstly, a big hit of fresh lavender, then dark plum, before going on to an aniseed/liquorice-type of note. Almost seems bubble gum-like; unusual but very pleasant when in conjunction with everything else. Later, all I got was roast lamb, blackcurrant (not typical of Pinot!) and sweet spice. Quite the nose indeed, and marks this down as having a seriously good first impression.

Once we had bounced around the room on what people could smell, the palate seemed like an after-thought. It was good, although somewhat straightforward, in peverse contrast to the multi-faceted nose. Linear, with lovely acid and a red fruit-led finish of reasonably good length, this was perfectly pleasant but wow…those aromas.

The styles continue to move apart as the wines get older. Pretty much the polar opposite in terms of nose: still that trademark meaty/savoury Pinot character, along with a touch of oriental spice (hoisin sauce?), but that was about it. To taste is where it became elevated though; like the ’12, the power and concentration hits you. Very precise. Again suggesting serious longevity, this vintage still seemed very closed but everyone was highly impressed with its undoubted ageing potential. But – was it interesting in the here and now though? Against the above, not really.

OK, time to put the theory into practice. How do these wines age with a proper period in the bottle? Unfortunately, the Montille did not impress as we’d hoped for in a Premier Cru wine from such an exalted site, just 500m from those incredible Grand Cru vineyards.

The wine seemed quite reserved; a very pleasant aniseed/vegetal combination, but the fruit was immediately seen to be fading badly (or perhaps yet to show itself?). The palate was good with still a lot of punch, including a satisfying finish, but the room seemed to feel this wine was not showing as it should — i.e. built to last — instead impressing early in their life with those terrific noses, without too much follow-on.

Could the last wine of the evening fare any better? Fortunately, yes, and the slow-burner we’d tasted before finally showed its teeth. Rich and compelling on the nose, deep and brooding with savoury, mature red fruit mingling with a rocket-like pepperiness. Attractive rusticity there too, the calling card of top Pinot. Nothing like the complexity of the ’11 Montille, but somehow just as engaging. Still unfolding on the palate but now announcing itself properly, this brilliant vintage showed class and power, exhibiting the longest finish of the night with meaty, vegetal and smoky red fruit nuances. Loved also the black tea that layered the beautiful tannic structure.

A fascinating tasting. The quality was without doubt there: these are two brilliant producers using fruit from hallowed ground. The common thread — and expectations from the audience — was that this is supposed to be Pinot that is built to last, and perhaps the 2005s were nowhere near ready, but the Domaine de Montille wines did not seem to have the longevity. The Dujac on other hand showed it in abundance, right from the earliest year we tasted.

While the Dujac were built for the long-term, the Montilles had so much instant appeal though, especially that incredible, mind-blowing 2011 nose. It will certainly live long in the memory. 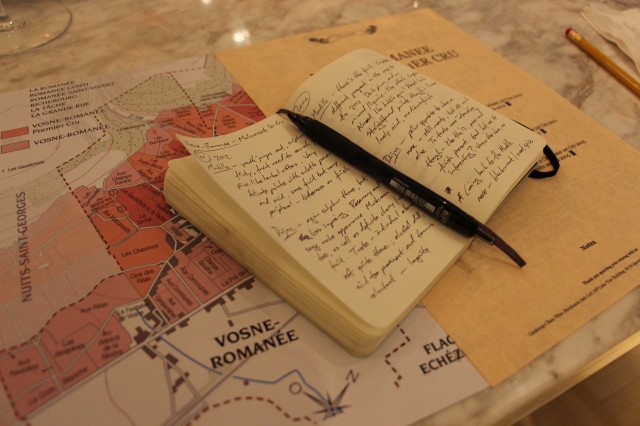 This article can also be found on G+C’s website. Check back in for future tastings!