I check in on Margaret River boutique producer Cloudburst, to see how Will Berliner’s wines are shaping up — but more importantly, with echoes of an historical tasting event, see how they fare when put in competition with some of France’s finest labels. During a very special tasting in Hong Kong, the results were somewhat unexpected…

Last year, while on a family holiday in Western Australia, I visited an American winemaker in Margaret River. His name was Will Berliner and he makes wine under the label Cloudburst. The experience of walking around his vineyard, and tasting his brilliant wines, led me to write a piece on The 23rd Parallel that gave me a new-found appreciation of what can be achieved by focusing on purity of process.

When Berliner told me that he was coming to Hong Kong, we agreed that we should set up a high-quality tasting for a small group of wine lovers, one that would put Cloudburst’s quality into context against the old, established order.

In May 1976, British wine critic Steven Spurrier held a famous blind tasting that put a series of top French producers up against a group of leading wineries from California. The results sent reverberations through wine circles, not to mention the French vinous fraternity, with the Stateside Cabs and Chardonnays making a meaningful impact on the Bordeaux and Burgundy aristocracy. Gallic arms were thrown in the air, subjectivity and statistical significance was questioned, but one thing was clear — it seemed that France no longer enjoyed a sense of hegemony over their rivals.

So it was against this historical reference point we decided to pit Margaret River’s newest and most exciting producer against a series of famous French labels, the daunting challenge for the former to make a creditable showing in what, everyone assumed, would be a walkover.

The format? A table of 12 people, including Berliner, tasting 8 wines. Four are from Cloudburst, four from famous estates in Burgundy and Bordeaux. The run is composed of four flights — two pairs of Chardonnays, two pairs of Cabernet-based blends — in which everyone tastes fully blind, and in no particular order. At the end of each flight the group takes a vote on one simple question: “which wine do you prefer?“

So, with Zaltos at the ready, here’s how my notes looked for the four flights (the identities of the wines will be revealed at the end).

#1: things kick off with somewhat of a vegetal note, some citrus then, as the glass warms, delicate floral cues with rich toasty popcorn. There’s good fruit on the palate; this is very fresh and pure. A lovely wine, and when compared to wine #2, definitely superior.

#2: a beautiful bright, light-gold colour. A little closed on the nose but the citrus profile is right on the money. Like its partner, there’s a great purity. Acid is more imposing than the first wine, but somehow the finish is shorter and less satisfying.

#3: the extra two years lead to a darker hue and, when hitting the nose, a real toffee popcorn note. Young, it seems very similar to wine #1. Deeper on the palate with lovely fresh minerality but, like #2, a touch closed with an appreciably short finish.

#4: a closed palate like its sparring partner, and a slight lack of zing to taste…but a truly wonderful nose. Multi-faceted, it had fresh lemon and an idiosynchratic saline note, but most striking of all, a beautiful eucalyptus character. Seriously impressive.

The vote: wine #3 takes three votes, #4 nine. Both classy, but that nose sealed it.

#5: A very primary, vineyard personality: herbal, blackcurrant and a slightly medicinal note. The table recognises this as Cabernet straightaway. Dry with great acidity, this is high-quality and layered. Smart stuff, and clean as a whistle.

#6: Fairly closed on the nose but the palate is “big”; rich with beautifully soft tannins, its powerful acid/alcohol double punch delivers almost a hedonistic experience. Berliner — and I suspect a lot of the crowd — know from the list which producer this is.

The vote: the room is split because stylistically the two wines were different. One of them contains a large dose of Merlot so perhaps not an appropriate comparison; both are terrific though. Wine #5 garners four votes, #6 gets eight hands in the air.

#7: Really floral; violets jump straight out of the glass. Cedar and a slightly ashy note. Layered and complex, slightly brooding. Can tell there is more to come here but really not showing its full hand yet. Rich and powerful on the palate, this had bags of class.

#8: Seemingly very similar to its stable mate, this was soft and delicate throughout. More fruit than #7, with a mineral seam, and had a delightful finish of ripe plum and lavender. With a light tannic structure that was right on the money, this wine was so elegant.

The vote: this time the table was split because both wines were simply fantastic. A lot of discussion and debate over which one was best, and having to make the binary choice became somewhat of a burden. In the end though, #7 took it, nine votes to three.

The results: once the fourth flight was concluded, with palpable tension in the room all eight wines were revealed…

Flight 1: Cloudburst was wine #1, so a clear 12-0 victory over a Roulot Meursault

Flight 3: #5 was the Cloudburst Cab with four votes, but the Ch. Palmer took it with eight

Flight 4: Chateau Lafite was #7 (nine votes) and the Cloudburst #8 with the three hands

So overall: out of the 48 votes on offer, the French classics won 20, Cloudburst 28. In spite of his label taking the spoils, Berliner immediately comments, “I need to work on my reds!”

What a fascinating experiment. These wines may be produced 14,000km apart — and good ones from France tend to be naturally a lot more restrained in the first decade of their lives — but it was striking to the group was how similar in elegance and style they were, none more so than the Chateau Lafite-Cloudburst Cabernet comparison.

Tellingly, the Cloudburst wines seemed a million miles away from that obvious, fruit-forward style often associated with Australia, California and the rest of the New World.

The key though will be longevity. On a number of occasions we found ourselves using the word “closed” when describing what turned out to be the French wines: when any wine is made to a high standard, this often becomes a euphemism for “long-lived”, and at this stage we don’t truly know how well Cloudburst will fare in this regard. 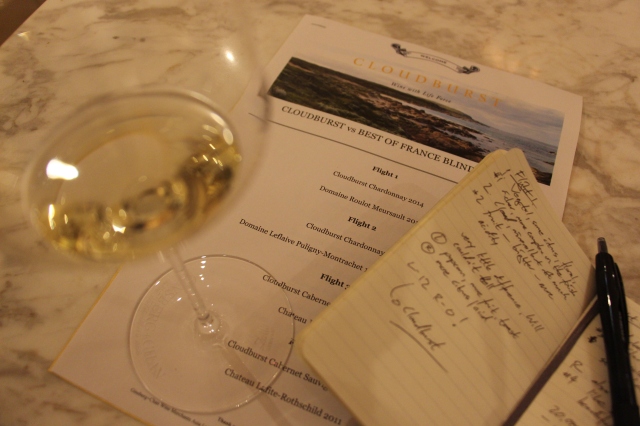 Structurally the reds appear to have all the ingredients to last for 15-20 years, the whites 10-15 perhaps, but until we get to taste a bottle that is a decade+ old, it’s a tough call (the first vintage was only in 2010). In the here and now though, we do know for certain that his wines are, without doubt, of the highest calibre.

One can always debate the composition of the tasting group, unconscious biases such as style preferences, and the way in which you score (or not) the wines. What makes these results impressive for Will Berliner’s wines, though, is that the tasting group had palates largely trained on the French classics.

In using these great Old World producers as a hallmark for purity and polish, even after you move past Cloudburst’s obvious and immediate qualities, you can see why these wines genuinely deserve their place at the wine world’s top table.

Thanks for reading, and my gratitude to the friendly folks at Ginsberg+Chan on Queen’s Road Central in Hong Kong, for hosting such a brilliant tasting.

One thought on “Cloudburst: Taking on the Old World”